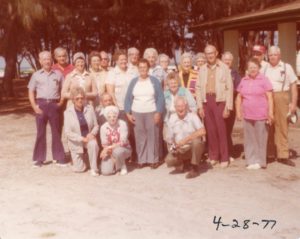 Fannie Married Herbert Beach, date and place of birth unknown. She had six children. One, Nancy, died at birth. My Mom, Angie Beach, was born Nov. 28,1892. Her older brother was named Frank Beach (date of birth unknown). Her younger brother was named Orlin Beach, and her two sisters were named Agnes and Alice. Alice was one year older than my sister Blanche, who was born July 4, 1913. Agnes was about three years older than Alice, and Orlin was about four years older than Agnes.

Fannie had two brothers, Richard and Henry, and two sisters, Aunt Mary Worth and the other sister I don’t remember. Fannie’s son Frank’s wife was named Flora, and their adopted daughter was named Patricia. Orlin’s wife’s name I can’t remember. They had no children. Agnes married Robert Bush, and they had three children, Earl, Charlotte, and Robert (Bobby). Alice married Merlin Murray; they had no children but adopted a boy that was from the foster care, his name is Gale Murray. He lives in the homestead in West Falls, N.Y.

My first memory of Gramma Beach was going to her home in Hayes Hollow for Christmas dinner. We went by horse and cutter. My dad never owned a car. In the summer time, us three older kids could walk to Gramma’s house by going up over the Stomeckey Hill Road and then across a large field, across a dirt road and then we were at Gramma’s house. Mom called ahead so Gramma would watch for us to come up over the hill across from the field. It was a walk of about three or four miles but was fun for us kids as we had to cross a small creek and sometimes we played in the water before going on to Gramma’s house. I remember one Christmas when the snow was too high for the horse to pull the cutter over the snow drift and we had to go back home where Mom put together a good Christmas dinner for us anyway. She was very resourceful about problems such as that. I’m sure Gramma was disappointed as she probably had a big dinner prepared for all of us. I guess they had turkey dinner for several days but with a big family it was a good thing. I can remember the wonderful home-made ice cream that we always had on special occasions. It was always so delicious. We got to lick the paddle when it was removed from the tub of ice cream.

One winter I was staying a while with Gramma and I had to go to the outhouse which was back of the house quite a ways and Gramma said someone should go with me as the wind was strong and it was icy out. I thought I was a big girl and could go by myself. They must have been watching as when I went out the door the wind blew me across the ice and away from the house and outhouse. Soon my aunt came out to rescue me and I was sure glad she did as I couldn’t get back on my own. Taught me a lesson, not to be so independent. Gramma lived in the old house at that time. It was just weather worn wood on the outside but comfortable on the inside with wood stoves that put out a lot of heat. When Frank and Orlin got big enough to go out to work they were able to build a new house across the road from the old house. The new house was much improved from the old one in that it was insulated and had an indoor pump for water. The outhouse was still the place to use as they didn’t have electric yet so no indoor bathroom. There was one bedroom downstairs for Old Gramma (my Grampa Beach’s mother). The upstairs had three bedrooms so there was a room for the boys, one for the girls and one for Gramma and Grampa.

The Old house was used for storage and for Gramma’s rug loom. It was a huge thing that Gramma made large rugs to sell. When I got big enough to sew I loved helping Gramma sew rags for the shuttles that were used on the loom. She let me push the shuttles through the warp before switching legs to cross the warp over the rags so the strips would be close together. She used her feet to push peddles that made the warp cross over each strip of rag that was used to make the rug. The old house always smelled of old wood and I thought that was such a heavenly smell. Probably some of the smell was from Grampa’s pipe that he smoked. There was a large sort of boom that had wires that separated each thread of warp. That was used to pound each strip of rags tight before the warp was crossed again for the next strip. I can still see the big old contraption in my memory. Gramma made the rug in strips about four or five feet wide and then sewed them together by hand. It was a lot of work but she got a good price for them. Later on I can remember Grammaa going to work in a basket factory in Orchard Park. That was when Orlin got a car and he worked there so Gramma got a job too. My Mom and Blanch worked there at one time also. It was the nearest work that was available to them.

Another memory of Gramma’s was the barn where they kept two beautiful horses. One was for pulling the buggy and one was for the farm work. The buggy horse was slick and beautiful. I remember going to Glenwood with my Aunt Alice to get some groceries. It was the nearest town to shop. I thought that was the greatest treat to be able to sit up there on the nice seat while the horse trotted to town. Such nice memories. My Aunt did the harnessing of the horse and buggy and was good with steering of the horse. I remember getting a candy sucker for the trip home. Some different from jumping into a car and going twenty miles to shop instead of about five or six.

In Gramma’s new house the living room was small but they had a piano in it and my Aunt showed me how to play a couple short tunes. That was a nice memory too. I remember when Old Gramma died and was laid out in the Parlor as it was called in those days. I looked at
her and felt so sad even tho I wasn’t particularly fond of her as she didn’t like us kids coming too close to her as she had a club foot that was very tender with arthritis and probably from the deformity. One night I had to sleep with Old Gramma and she told me not to get over on her side of the bed so all night I hung onto the side of the mattress so I wouldn’t get on her side. The next night I asked Gramma if I could sleep someplace else so she made a bed in an old bath tub that they used to bathe in. It didn’t have running water into the tub and they had to heat water in a tub and carry it to the big old bath tub so they could bathe. It really was comfortable with all the pillows and blankets Gram put in it for me.

Gramma had a large sheep that they kept for the wool which when sheared was sent away to be cleaned, carded and returned in large bags. Gramma had a spinning wheel that she made yarn out of the wool. The yarn was wound into large loops and tied ready to be dyed different colors for mittens and sweaters. We always got new mittens or a sweater for Christmas and loved them. I liked the gloves best as my fingers stayed warmer in gloves than mittens.

Gramma and Grampa had a close neighbor, the Randalls who had a donkey that made the strangest sound when they banged on the feed bucket. They also were musical and played at the local barn dances that when I was old enough I learned to do square dancing to their music. He played the bass fiddle and she played a violin but they could really play the music for barn dancing. Someone else played the piano. My brother used to go to the dances and when I was sixteen my parents let me go with him but I wasn’t to go out of the dance hall and was to come straight home after the dance which cramped his style but he was good about it.